Rapidly increasing demand for fire and emergency medical services (EMS) and longer than desired response times in Northern Nevada’s Truckee Meadows Fire Protection District (TMFPD), including obligations to respond outside of the District pursuant to automatic and mutual aid agreements , will result in the need by FY2021 for new fire stations and crews or the addition of staff and vehicles at existing stations, where they can be accommodated.

It is time to decide and act to bring the TMFPD capability up to meet the increasing demand.

Come to the meeting at the Tamarack Junction Casino! 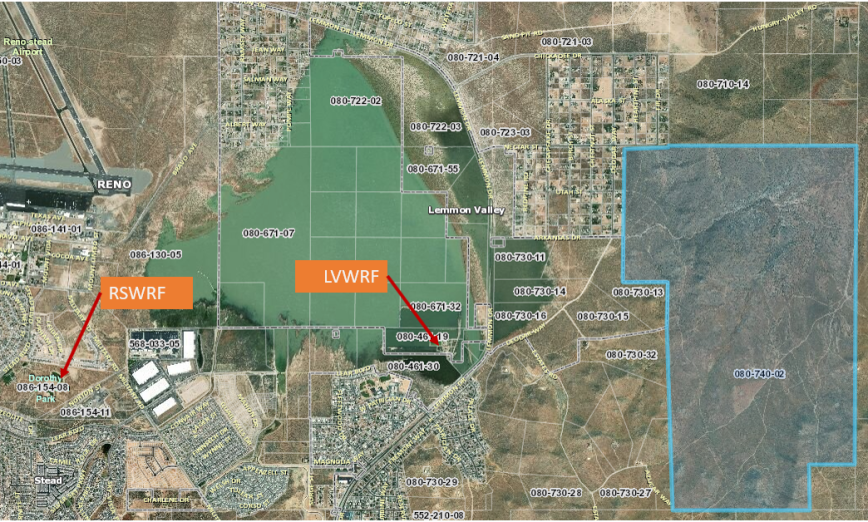 Agenda item 11: an interlocal agreement regarding the giant Stonegate development at the foot of Peavine Mountain east of Golden Valley.  This is for wastewater handling at the Cold Springs Wastewater Reclamation Facility (CSWRF).  Dwayne Smith explained this would include easements for sewer lines within the Reno city limits.  This agreement was approved by the Reno City Council last week. CSWRF uses infiltration basins to dispose of the treated effluent percolating into the soil and aquifer below.  CSWRF effluent is only treated to Grade-C; the lowest standard allowed.  The current permitted capacity is 0.7 million gallons per day (mgd).  The plant is currently flowing less than 0.35 mgd.  This would allow for approximately 700 more homes to be connected to the facility.  This would not be sufficient for the 5,000 homes in the Stonegate plan.

Hartung “Why not ask the developer to pay to improve the Cold Springs sewer plant to refine their effluent to Class-A+?”  Smith promotes the idea that as Stonegate is built, the county will have a plan to treat the CSWRF effluent to a Class-A+ standard.  He claims the percolation basin can absorb 6 mgd of effluent.

Herman “Have we learned from the Lemmon Valley flooding so we don’t repeat this at Stonegate?”  Smith “Just as we’ve been very successful in Lemmon Valley, we would expect to be successful in Cold Springs.”  Unbelievable!  Smith made no eye contact and his answer was ‘word salad’.

The motion to approve the interlocal agreement passed unanimously.

Washoe HR Director, Patricia Hurley, gave a presentation about the search for a new county manager.  There were 17 applicants, 11 of which possessed the minimum qualifications.

Approaches to take regarding the selection from here.:

There was an extended discussion of whether the BCC should select from the candidates who have applied or to use an executive recruiting firm to find additional candidates from a national search.  The county attorney (Lipparelli) pointed out that the agenda item allowed them only to give instructions to staff regarding the selection process.  If the BCC wanted to select the recruiting firm, that would be outside the scope of the current agenda and would require a new agenda item at a later meeting.  Commissioners made the following points.

Commissioners agree to have staff engage a national recruiting firm to find additional candidates.  There was no vote: it was just instructions to staff.

Note: the county manager serves at the pleasure of the BCC.  Even the most professional and ethical candidate will likely need to follow the lead of the commissioners in favoring the developers.

Highlights from today’s (5/21/19) TMFPD Board of Fire Commissioners meeting and other intel.

Commissioner Lucey was once again absent.

Fire Marshal – The resignation of Fire Marshal Beaver will result in a vacancy for a few months while a search ensues for her replacement. Previous 2017 finalists for the position are being contacted. The position will be held open until November 2019 for budget reasons.

Deputy Fire Chief – Operations – This position is also vacant given the retirement of DFC Gorgon last month. An internal candidate will likely be selected by August to fill this vacancy.

Fleet – New water tenders are in service at TM#32 East Lake and TM#40 Mogul. One of the new Type 1 structure engines will also be assigned to TM#40 when outfitting is completed at month’s end. For FY2020 the district will acquire one Type I structure engine and one Type III brush engine.

TM#37 Hidden Valley Station – The site for the replacement apparatus bay will need a boundary adjustment with an adjacent Reno owned parcel. The Board authorized staff to pursue this agreement with Reno. The City has agreed and resolutions at the City Council and County Commission meetings will be processed in June and July. An architect was selected today to address the renovation to the crew quarters (former house adjacent to the current station) and the new apparatus bay (two bay two vehicle deep structure elevated slightly to account for the adjacent flood zone).

FY2020 Budget Highlights – The budget was approved with some cost modifications made by Chief Moore from the draft budget presented in April. The District proposes to seek its first debt service in January 2020 in the form of a medium term (10-yr) bond for $4.7 million to finance the renovation/expansion of stations and the acquisition of rolling stock (two engines). TMFPD will pay a fixed fee of $875K/yr., for three years to the WCSO for dispatch services. The FY2020 Budget is expected to have a 19% ending fund balance with revenues slightly less than previously anticipated based on very recent State of Nevada financial projections. Commissioner Jung requested staff to prepare an impact statement for the next Board meeting for annexations by other jurisdictions, primarily Reno, on TMFPD revenues (mainly property taxes).

Fire Chief’s Report – There was considerable discussion regarding the call disparity within the District with Sun Valley and Spanish Springs accounting for 50% of all calls district-wide and the staffing difference, as the South Valleys have five stations to the North Valley’s four. Sun Valley #45 responds to about 10 calls per day and Spanish Springs #46 to about 7.5 calls per day (CY2018 call data). This issue will be addressed in July with the production of the District’s ‘Strategic Plan’ (all facets of the District’s operations and funding) now in process. Also, a ‘Deployment Report’ (manpower/stations) will be available in September. Chief Moore reported on the automatic and mutual aid responses for TMFPD to Sparks FD and Sparks FD responses to TMFPD at the previous request of Commissioner Hartung. Commissioner Jung requested a monthly report on this subject for all involved jurisdictions. Chief Moore reported that the neighborhood with the highest number of Priority 1 (life threatening) medical calls is Arrowcreek.

Union demands in negotiations – IAFF 2487 wants an educational pay incentive for those having an Associate’s or Bachelor’s degree. While there was discussion there was no Board action or public comment.

The next TMFPD Board meeting is scheduled for Tuesday June 18th at 0900.

This is a guest post by Mike Lawson, Washoe Planning Commissioner.

SB 327, a bill introduced by Senator Ben Kieckhefer that would have further obfuscated the planning process in Nevada, died a quiet but appropriate death in the Nevada legislature on Friday when it failed to pass out of the Assembly Committee on Government Affairs. This terrible piece of legislation was introduced as a back door attempt to allow for and justify the use of “super pads” in the tentative map phase of the planning approval process. Approval of Super pads would circumvent the existing requirement to provide specific residential design criteria and identify the infrastructure impacts associated with them so that the public can provide input.

The recent Stonegate project that incorporated “superpads”, which was quite likely approved illegally by the city of Reno, seems to have been the genesis for the proposed change to planning law, and it is no coincidence that Senator Kieckhefer introduced the legislation considering his company’s role in getting Stonegate approved. WRAP followers would be well advised to remember Senator Kieckhefer’s role in advocating and legislating for inappropriate development the next time he faces reelection.  Reno Council-Member Brekhus appealed the approval of superpads from within the city council (Brekhus Superpad Appeal), but her appeal was denied.

SB 327 would have quietly sailed through the legislative process had it not been for the efforts of Steve Wolgast, Kristin Hemlein, Pam Galloway, Don Drake, and other WRAP activists to inform the residents and solicit support in opposition. One hundred thirty-seven concerned citizens are to be commended for taking the time to post comments to the legislative website in opposition compared to zero posted in favor. Additionally, several concerned citizens, including Kristin Hemlein, traveled to Carson city to testify in opposition. These combined efforts convinced the committee to let the bill die a quiet death. The voice of citizens expressed at county commissioners meetings, city council meetings, planning commission meetings, and in forums like WRAP, Nextdoor, and Facebook is making a difference. Do not be discouraged by recent set backs, rather be encouraged by the successes we achieve. Thank you for caring and acting on behalf of our neighborhoods and our broader community.

Please consider attending the WRAP meeting and mixer at the Tamarack Junction from 4-6 p.m. on Sunday June 2 to learn more about the ongoing efforts to sustain the Nevada lifestyle we are trying to preserve.

The Western Regional Water Commission (WRWC)is considering new approaches to address wastewater handling for the North Valleys.  One proposal on their agenda is to redirect some or all of the RSWRF (Stead sewer plant) discharge to Long Valley Creek  north of Peavine Mountain in California (item 8).  The proposal is to budget $75,000 to study the proposal.  It is not explicit whether this would be to divert some of the current discharge, or only the additional discharge related to expansion.  With the RSWRF expansion plans denied by the Reno Planning Commission, it is not clear if this will still be seriously considered.

The plan to expand the wastewater treatment plant capacity at Stead (RSWRF) was denied unanimously by the Reno Planning Commission last night.  This was a great meeting with incisive questions, informative answers, and insightful discussion.

Irene Tudor, a member of the Ward-4 NAB made the following points.

Joe Coudriet, Reno Public Works Department, gave a presentation prepared by Stantec.  This included an informative map of planned development in the area.

The Senate Bill 327 will allow developers to get easier approval for massive developments (like Stonegate or Daybreak) with less public review.  It is written by Ben Kiekhefer on behalf of his employer who works for developers.  It passed the Nevada Senate by a wide margin.  It is now before the Government Affairs Committee in the Assembly which does not seem to take much interest in it.  They may review it as early as Thursday 5/16 (agenda).

Note: the bill has been substantially edited from the original version, but the effect and intent are unchanged.

Please send one or more members on the Government Affairs Committee a brief message telling them to oppose this terrible gift to developers.  Developments built under these rules could detract from the appeal of the Truckee Meadows for generations.

If you have time, come to the hearing.  It will be in Room 3143 in the Legislative Building in Carson City starting at 9:30 AM.  The committee is considering a number of bills.  There is no guarantee that this bill will be covered on 5/16.

Please join like-minded neighbors for an update on development issues around the county and an opportunity to meet other supporters of responsible development.  Have a glass of wine or other beverage from the cash bar.

5:15 PM Get acquainted with neighbors and principals.  Inquire about what tactics seemed to work to blunt destructive development.

The Tamarack Casino is located at 13101 South Virginia St. just north of the Summit Mall.  The Casino was kind enough to provide the meeting room free of charge.