Mortensen-Garson is a zoning overlay which defines special zoning in the Verdi area that was approved by the City of Reno in 2004.  The overlay supersedes the existing zoning.  Issues not addressed in the overlay default to the existing zoning.  It is generally located on the north and south sides of Interstate 80 between the Garson Road Interchange and the Verdi Interchange.  It is 2724 acres owned by Irene Mortensen, Boomtown Hotel & Casino, Santerra LLC,  and Robert and Marjorie Quilici  (as of 2009).

These properties were annexed by Reno in 2001.  Washoe County went to court to block the annexation (CV01-03867) which resulted in a settlement agreement defining the maximum density development allowed.  It allows up to 3,000 residential units and up to 176 acres of commercial development adjacent to I-80.  The 2002 Truckee Meadows Regional Plan envisioned the Boomtown area as a “major employment” area.  Parts of the area with slopes greater than 30% will be preserved as Open Space.  This applies to much of the properties north of I-80. 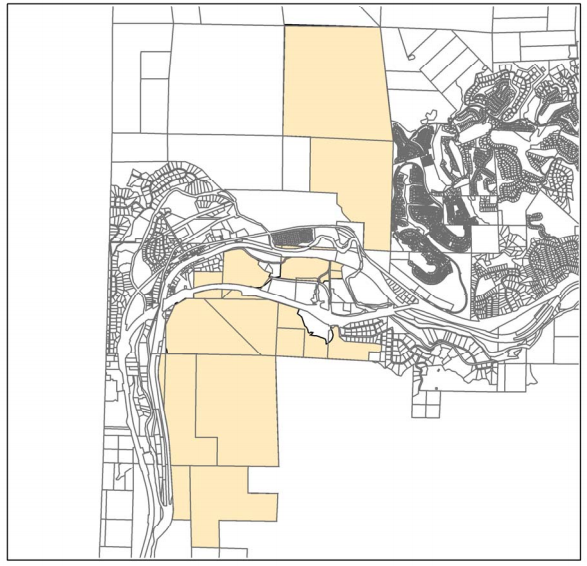 The special district allows for the following zoning.

The stipulation is that the maximum development intensity by property owner is limited.  See the handbook for more detail (link below).

Routes I-80 and US-40 are the major roadways serving the area.  The plan is to maintain a level-of-service-C with the completion of the new developments rather than “D” which is commonly required in the area.  See the handbook (section 3.2) for a detailed list of changes at each intersection (link below).

The preliminary plan incorporates the existing Boomtown water system and couples it with the extension of Truckee Meadows Water Authority (TMWA) facilities to the new developments from the Mogul area. The preliminary planning includes the estimated water demands and supply, water transmission and distribution, storage requirements and water rights discussion. General system components and a preliminary layout are provided in the plan.  The property owners have nearly 2,000 acre-feet of water rights combined.  More water rights will be needed as later developments are occupied.

The new developments will connect to an extension of the Lawton-Verdi interceptor line and be served by Reno’s Truckee Meadows Wastewater Reclamation Facility (TMWRF).

There are currently two fire stations in the Verdi area, these include the Nevada Division of Forestry (NDF) station at the south end of the Boomtown/Garson Rd./I-80 interchange and the Verdi Volunteer Fire Department at Bridge Street. Two additional fire facilities, to be built and maintained by the City of Reno, include a proposed station in the western end of the Somersett development and a new site within the new developments at the I-80/Garson Road Interchange. Additional fire service demands created by development will be funded by the increased property tax, sales tax and fees generated by the development of the subject properties. These services will add to, and not detract from, the services being provided to the existing residents of Verdi.

The area is currently served by the Washoe County Sheriffs Department. Additional police services will be provided by the City of Reno Police Department and funded by the increased property tax, sales tax and fees generated by the new development. Additionally, the new fire station site at the Garson Rd./I-80 interchange is large enough to allow for a police substation if needed.

A master hydrology study was prepared by Nimbus Engineers for the M-G district.   It considered the impact of 5-year and 100-year storm events.  Nimbus used the U.S. Army Corps of Engineers Flood Hydrographs HEC – HMS 2.1.2 (2002) program and the procedures in the Washoe County Hydrologic Criteria and Drainage Design Manual (1996) to develop watershed parameters.  Nimbus found that outside the vicinity of the Truckee River, the project is not within the 100-year regulatory flood plain. The study concluded that the increase in peak flow from the majority of the watersheds is minimal.

The stormwater plan for the properties will consist of the following: